This is for Windows 10 but will probably work on other Windows versions too.

Windows 10 is still relatively new so some vendors (looking at you Lenovo) haven’t updated the drivers. For example in my case I had problems with Conexant driver for Windows 10 – microphone didn’t work in some programs. To make the long story short, I tried everything and the solution was to uninstall the driver and use older version. The problem was, Windows 10 kept reinstalling the latest driver!

The solution was this: Install Microsoft tool that “hides” specific driver form Windows so Windows doesn’t “see” it and doesn’t update/reinstall it.

If you want Windows to update the driver again, the run this tool again and select “Show hidden updates” and then remove the hidden driver.

If you set up a global variable in the header you would expect that it would be available everywhere, right? That is the definition of the word ‘global;, right? Well, it doesn’t work like this and the reason is because in WordPress header and footer are called via functions so the variable is only accessible in scope of each function.

One of the solutions is simple – use global variable before the declaration AND before echoing.

For example, add this to header.php:

and then in the footer.php you do this :

and it will echo the content of your $var variable.

Be advised though that some people say using global variables is not the best practice.

I’m liking Windows 10 but it has a lot of bugs that make it look like it is still a beta software. One of the most annoying bugs is that the volume icon simply disappears (this usually happens to me when windows 10 wakes up from sleep). Even restarting doesn’t always help. Here is a weird solution I found (which is still just temporary solution but it beats restarting). Going to Notifications & Settings then “Turn system icons on and off” doesnt help because Volume option is greyed out.

This is what helped. When the volume icon goes missing do this:

1. Click on search icon (near start menu) and type “display”.

For some weird reason the volume icon is back! Hopefully it works for you too. This (setting text size) might mess up your desktop icon alignment a little but it is not really a problem.

I am using Contact Form 7 on one of WP sites and after update (not sure which one) I started getting this error after user submitted the form:

‘Failed to send your message. Please try later or contact administrator by other way.’

As always, lots of way to complicated solutions on the net when, in my case, the solution was simple.

This is what I had before (CF7 admin): 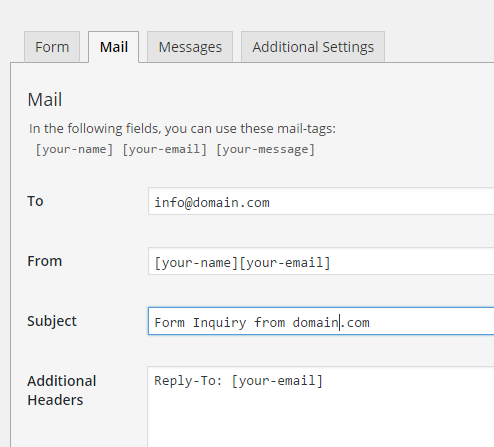 And this is the one that works (I just replaced data in the FROM field): 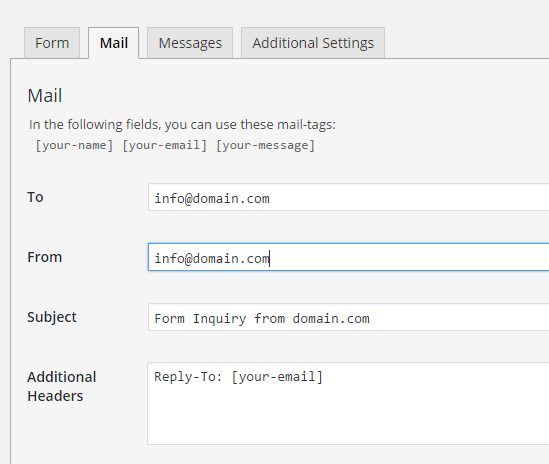 of course you need to replace domain.com with your domain.

I do not know why did it worked before and why it stopped working but this is how I solved it. Of course you cant just hit reply now because your email is REPLY email. To solve this you can try this :

If you want to see all the avatars / photos that your Viber contacts use for avatars (even old ones) then you can find big sized images here (this is only for Windows):

so for example if your drive is C, your windwos profiel is FooUser and your phon is 555-55555 then you can find it here:

For some reason I keep forgetting these breakpoints and have to search them on the net.

I wanted to update one of my WordPress sites from 4.2.2 to the latest but WordPress did not show me there is a new version available even though WordPress is already on version 4.3.

If this happens to you the first thing you should check is to see if there is this line in your wp-config.php file :

In my case it was, so I set it to false however it sadly didn’t resolve the issue.

If the same thing happens to you then I suggest you to install this awesome plugin (just look at the ratings):

It immediately found out that WordPress code files were modified by cPanel (most probably if you installed WP via your hosts cPanel), which added few lines to core files that prevent WordPress to show updates (something with incompatibility). Word Fence then offered a bulk replace and replaced these modified files with the clean WordPress core files. Refresh and WP immediately offered and found update to latest WP.

If you get this error:

"MissingReferenceException: The object of type __ has been destroyed but you are still trying to access it. Your script should either check if it is null or you should not destroy the object."

then the first thing you should do is to check if you have (additional) inspector window locked. Simply unlock it (you can see the small lock in top right corner of inspector window) and this error should go away.

I have no idea what is causing it (I am just starting out with Unity) but this solved it. Luckily I found the answer quite fast and did not need to debug and waste a lot of time checking the code when the code was completely fine.

I installed Windows 10 and after some time search in start menu stopped working. No matter what I typed in, the menu remained empty and the small dots going from left to right (search progress animation) just kept moving and nothing showed.

This is how to solve it: open Task manager (press CTRL + SHIFT + ESC), go to Details tab (If you don’t see it there then check Processes tab) and stop Cortana or SearchUI.exe. Just right click on the task then select End Task. After you end Cortana try searching again.

It is easy to get a post ID in WordPress. To echo it on screen we write:

To store the ID into variable we use something like this :

There is one caveat though: if you read the description on WordPress codex it says this in both cases: This tag must be within The Loop.

So if you ever wanted to retrieve or display the WordPress post ID in footer or header or outside of The Loop you might end up being disappointed because the ID returned is not the correct one (usually we always get the same id, most probably the last one?)

Now I am not going to go into technical details or why is that so here is the solution that worked for me. You